What would good television drama be without a little bad-boy romance? While we all enjoy getting wrapped up in a juicy love story, it’s important to note that many compelling shows are good at romanticizing unhealthy behaviors. On TV we may perceive a male character continuously pursuing a female character as cute and endearing, but if this were happening in the real world, it would be considered stalking. On the one hand, these shows can give young people the impression that this kind of behavior is normal. And on the other, they can also help start a meaningful conversation about toxic relationships. The handsome Joe Goldberg meets aspiring writer Guinevere Beck in his bookshop and is instantly smitten. Joe begins to slowly infiltrate her life by stalking her via social media. His strategy works and the two begin a relationship. What makes this show unique is that Joe narrates his thoughts directly to the viewer. As Joe justifies his inappropriate behavior by extolling his love for Guinevere, he is manipulating the audience as well as his love interest.

There are several moments of vulnerability from Joe that make him almost sympathetic which may be why many fans have developed crushes on the character, even though he isn’t a person anyone should want to date in real life. In fact, actor Penn Badgley has found the glorification of Joe so disturbing that he has used social media and interviews to urge the show’s viewers to stop romanticizing dangerous men. The Spanish Netflix show, Elite follows three students from working backgrounds who are accepted into a private school in Spain. One of the main relationships that take place is between the Muslim scholarship student Nadia and the privileged Guzman. The relationship starts on a toxic note when Guzman attempts to take Nadia’s virginity because a friend dares him. Although Guzman develops feelings for Nadia, she soon finds out about his plans and wants nothing to do with him. To prove his loyalty Guzman insists he’s a good guy because he did not end the bet and sleep with Nadia while she was intoxicated at his home. But Nadia doesn’t buy his excuse. When she rejects him, Guzman shifts the blame onto her, implying she wanted him to make a move. Gaslighting is a hallmark sign of an unhealthy relationship. Unlike love, unhealthy partners manipulate their s.o. until they doubt themselves or assume responsibility for their partner’s behavior. Guzman’s attempt to gaslight Nadia and manipulate her feelings toward him with his apologies only proves he’s toxic. 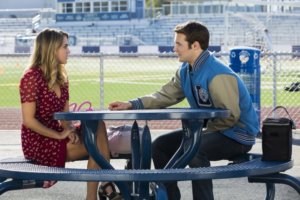 There are many unhealthy relationships and friendships in this series that can be explored here but we will focus on Bryce and Chloe. Their typical jock and cheerleader relationship takes a turn when Bryce is arrested for rape. Chloe begins to experience the monster he has been accused of being when he forces her into sexual situations she doesn’t want to participate in. While hanging out at his pool house, Bryce initiates sex with Chloe. Her disinterest in sex doesn’t stop Bryce. “ You’re good, right?… You want this, yeah?” he says as he undresses her. Though Bryce says all of the things you would expect from a caring partner, his manipulative behavior leaves very little room for Chloe to object to sex. As the scene unfolds it becomes clear these questions function more like affirmations to justify his behavior, than questions to establish consent. It’s hard not to root for Monse and Cesar who have been best friends since childhood and are now romantically involved in secret. Their relationship, though endearing, is not without its share of drama. When Cesar becomes homeless after failing to take out another gang member, Monse becomes his emotional crutch. Ready to escape their violent neighborhood, Monse tells Cesar she is thinking of staying with her estranged mother. However, after Cesar confesses his feelings for her, Monse decides to drops the conversation altogether; likely because of her sense of duty and loyalty to him. During another incident at their school dance, Monse relives her friend’s murder and tries to leave; but Cesar has other plans. He begs her to stay because “he needs her,” before warning her that if she leaves, their relationship is over.

Considering the setting of this show, it’s difficult to not feel at least a little sympathy for Cesar. We’ve all experienced situations that left us overly-stressed and required additional emotional support from a partner. When this happens a partner may step in to help as you figure things out but they should never bear the brunt of your burdens. Ultimately, it is not your partner’s job to save you. Anyone who manipulates their partner into believing it is should know #thatsnotlove.

Television series are meant to engage viewers with its emotional content and it’s easy to get caught up in the redemption arc of a particular character. But that doesn’t mean we shouldn’t call out bad behavior when we see it, even if it’s on the small screen.

4 Ways Your S.O. May Be Deflecting Responsibility