6 Things to Consider Before Sending Nudes

Imagine this: You’re exchanging flirty texts with your S.O. before you join your family for dinner. Somewhere between the barrage of emoji hearts and “LOLs” things take a steamy turn when your S.O. playfully asks for sexy nudes. You reply:

If you picked option C, you’re not alone. According to a survey by MTV-AP, 1 in 3 young people (14-24) have engaged in some form of sexting, either sending or receiving nude photos, with another person.

While it’s no secret that people have been exchanging risqué messages since the dawn of the internet, most people don’t anticipate how nudes can dramatically shift the power dynamics of a relationship, almost overnight.

“Phones feel more intimate than computers. And although a sext may seem private, it’s just as easy to forward a sext as it is to send,” relationship expert, Carol Allen told the Huffington Post. “It’s this false sense of security that gets people into trouble when they sext,” she continued.

Even if you’re sure your partner won’t share your nudes and confident they won’t end up on a weird internet chat room (which are all legitimate concerns), once a photo is shared it never really disappears. The internet is forever and there are real-life consequences for the things you share online. Even on Snapchat where photos disappear in 24 hours, there is no guarantee someone won’t screenshot your pic or take a picture using someone else’s phone. So before you press send, here are 6 things to consider.

1. Is Your Partner Being Manipulative about it? “We aren’t having sex, so why can’t you send them?”

“You would send them if you loved me…”

Is your partner working overtime to convince you to send nudes? Uh oh, red flag.
Like it or not, sexting (sending or receiving nudes) is a form of sexual activity that should never involve pressure or guilting of any form. When someone is manipulative, they aren’t respecting your boundaries which is a common theme in unhealthy relationships. Experts say demanding explicit photos is a power play unhealthy partners use to see how much control they have over their partners. Spencer Coursen, security expert from the Coursen Security Group says, “It’s the abuser saying, ‘How much control do I have over you? If I say, ‘do this,’ are you going to do it?”.

2. Do You Trust Your Partner?

When you think about your relationship overall, do you feel like your partner is trustworthy and dependable? Has your partner consistently shown you through their actions that no matter what happens they have your back? This may seem like a no-brainer for most people, but in an unhealthy relationship a person’s decision making may be clouded by gaslighting and emotional abuse. This, in turn, may cause them to doubt their instincts and overlook inconsistencies in their partner’s behaviors. If you’re not entirely sure that you can trust your partner, don’t send any photos. Another thing to consider is whether or not you want this person to have your nude photos after you’ve broken up. It’s easy to trust your partner in the moment you snap the pic but it’s when things go awry (i.e. controlling and manipulative behaviors crop up) that you need to be concerned with.

3. What if Your Boss Sees Them? As Karen Fatti so eloquently put it in her article, 10 sexting tips that will protect your nudes and take dirty talk to the next level, “Sexting really all boils down to how much you really DGAF.” So if the idea of your nude photos mysteriously crossing paths with your boss keeps you up at night, abort mission, do not send.

RELATED: Phrases like “I’m sorry” or “I love you” can take on an entirely different meaning in an abusive relationship. Check our Asterisk to learn more.

While laws may vary state-to-state, if you’re underage (that is, under the age 18) it’s actually illegal to take and send nude pics. In fact, two teens from North Carolina were arrested after a phone was found containing nude photos that they had taken and sent to each other.

4. Does Your Partner Go On Power Trips? Once you share explicit photos with an unhealthy partner you may notice their behavior takes a turn for the worst. They may become more insistent and demanding of your time. They may even behave as if they “own” you, using your photos as a threat during disagreements. This is because when you give nude photos to someone the power dynamics in the relationship instantly change. Suddenly they have something that can be used against you during fights or if you decide to leave the relationship.

Nude photos can even be used to systematic teardown someone’s self-esteem as Grace found out after she shared intimate photos with her S.O. Instead of bringing them closer, she told Seventeen magazine that he used them as an opportunity to “point out some of my flaws.”

RELATED: 5 Lessons We Can Learn from Rob Kardashian and Blac Chyna

5. Do You Trust Your Partner’s Judgement

Read this sentence aloud: 100% of people are guilty of doing unhealthy things. That doesn’t mean we’re bad people, it just means we’re human. And sometimes the people we care about the most make mistakes when it comes to sharing things you thought were just between you. Andi found this out the hard way. When he sent his girlfriend a snap of his chest he didn’t think it was a huge deal. The pic was pretty PG and they’d already hooked up but to his surprise the snap didn’t stay between them. He told Seventeen Magazine, “She ended up putting it in a group chat that had three of my friends in it. I wasn’t upset or embarrassed that my friends saw it, but it made me question her judgment and the safety of sending sexy pics to anyone.”

RELATED: What “I’m Sorry” Means When it’s Used to Manipulate You

6. Are There Alternatives to Sending Nudes? 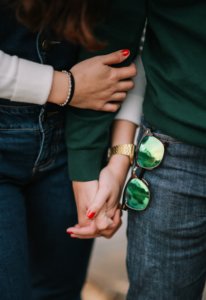 While it’s normal for couples to exchange these sorts of photos, sending nudes is not the end all be all of intimacy. There are tons of ways to get the heat rising in your relationship without nudity. Calling and talking on the phone may be more sensual as you get to hear your partners voice as well as use your imagination. If you are a better writer than a speaker, you can always text each other different scenarios to imagine.

Sharing nude photos always involves a bit of risk. While you might not think your partner would ever use them against you, you should always consider it as a possibility.

Ultimately, it’s your body and whether your relationship is short term or meant for the long haul the only person you need to answer to is yourself. That said, our instincts are usually right, if something feels off in your relationship, it most likely is. Healthy love should make you feel safe and comfortable. No matter what you decide to do with your photos, you should feel respected, feel trust in your partner, and come to a mutual understanding that keeps everyone’s boundaries in mind.

Need more healthy relationships advice? Sign up for our newsletter so you don’t miss out on a thing.

Keeping Your Relationship Healthy During the Back-to-School Season